For the analysis of gene expression, we have developed in 2008 a high-resolution and cost efficient RNA-Seq variant. MACE is an improved variant of “3′ single end mRNA Seq” or “Tag-Seq” that is based on sequencing only one single molecule or “tag” per transcript. Therefore, each NGS read represents one single transcript. In contrast to most other Tag-Seq methods, in MACE-Seq, each molecule is barcoded with a unique sequence (“TrueQuant” -unique molecular identifiers) for PCR bias elimination (patented).  MACE-Seq reveals gene expression, allele frequencies and alternative polyadenylation at only a fraction of the sequencing costs of regular RNA-Seq. Our service optionally includes all steps, from RNA-extraction to bioinformatics. MACE-Seq is also available as a kit for your own lab.

Please feel free to watch the video for a quick introduction, further information can be found below.

mRNA transcripts – many in low copies, few in many copies

The most interesting transcripts such as transcription factors or receptors are usually transcribed in very few copies, while a handful of transcript-species e.g. of structural proteins can make up 80% of a transcriptome. Rare transcripts are usually invisible on Microarrays and with RNA-seq, they can only be detected at very deep sequencing depth of 100 million sequences or more.

Because in MACE  (figure below) only one single read per transcript molecule is sequenced, short and rare transcripts are identified already at 10-20 times lower sequencing depth, when compared to full length RNA-Seq and no length-based normalisation is required. 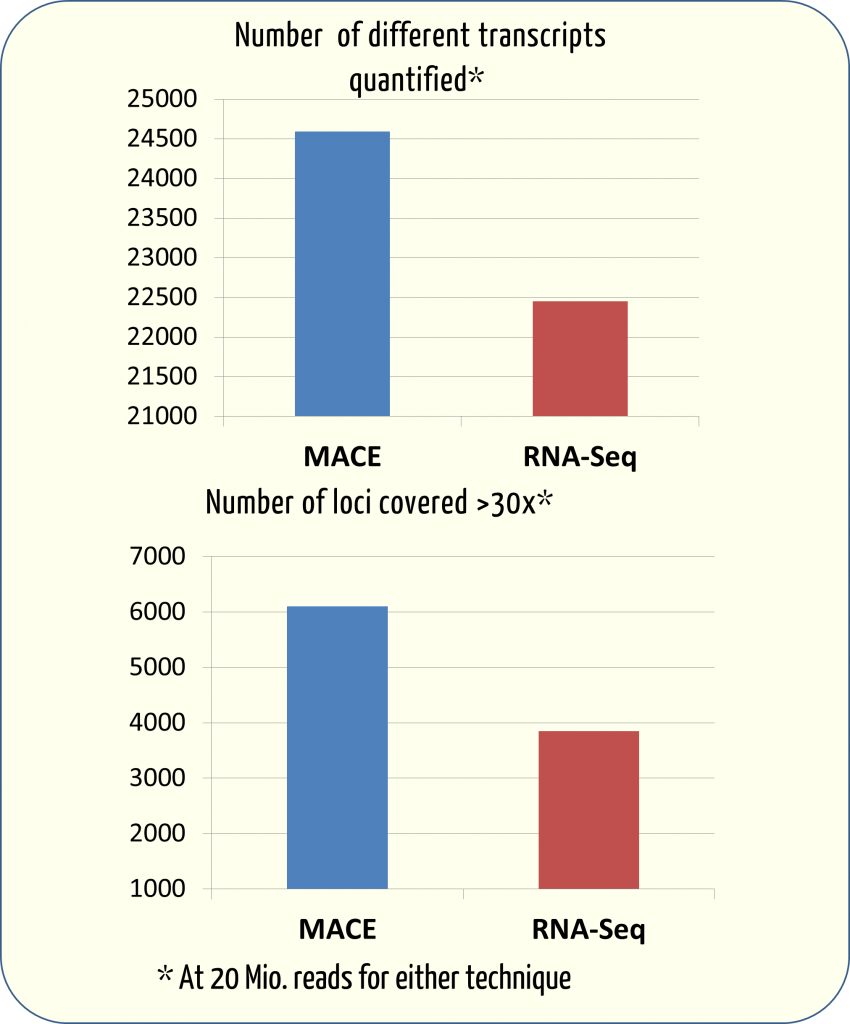 In MACE-Seq up to 96 samples can be pooled directly after the first step of the protocol. This as two major advantages:

1) low amounts of input: Many samples of low amounts can be processed and the number of PCR cycles for the library generation can be drastically reduced.

2) Handlig: Only one single reaction tube must be handled after the initial barcoding and cDNA generation steps

The figure to the left (upper part) shows the number of different transcripts identified with MACE (blue) and RNA-Seq (red) at the same sequencing depth of 20 M reads from human placenta tissue.  The lower part shows the number of covered genetic loci with minimum 30x coverage. Because of the concentration on a smaller part of the transcript, the coverage is higher and alleles can be discovered more accurately. In addition, the aimed 3’ends are usually rich in polymorphisms.

As only the 3′ ends of the mRNAs are required, MACE works very well also with differently degraded material. Down to a RIN (RNA Integrity Number) of 3, MACE is fully functional.  Because only one tag is sequenced per transcript, differentially degraded samples can be readily compared, unlike with regular RNA-Seq. This is because for the latter the number of generated reads per molecule is depending on the degradation status.

A peer reviewed comparsion between MACE-Seq and RNA-Seq for FFPE material was published by Boneva et al. 2020 (https://www.nature.com/articles/s41374-020-0446-z). The authors found that “…detection patterns appear to be stable over time and MACE transcriptome analysis is feasible even after 13 years of storage. Thus, 3′-MACE-RNA sequencing allows to perform transcriptomic analyses in aged, archived FFPE tissue samples, which may have been considered unsuitable for RNA sequencing in the past. “

Sensitivity and reliability for low input

MACE-seq requires only 0,05 ng of total RNA as input while maintaining consistent transcript quantification. As shown in the table below, the pearson correlation between MACE-seq transcription profiles from 100 ng and 1 ng of total RNA input is 0,96 and 0,87 between data from 100 ng and 0,05 ng total RNA. The lower pearson correlation in the later comparison is due to a reduced number of low-level transcripts in the 0.05 ng sample.

MACE vs. Other 3′ RNA-Seq Methods

MACE was developed in 2007 when we invented the “TrueQuant” Method (Unique Molecule Identifiers, UMIs). The MACE technology therefore has included the TrueQuant barcodes, individually barcoding each molecule prior to the PCR steps. The individual barcodes allow identification of PCR copies and sequencing errors and are a pivotal element of our techniques. This is an important difference to other 3′ end sequencing techniques without this error correction possibility. Also, MACE does NOT use random hexamers for the cDNA production to avoid the introduction of bias (see Hansen et al. 2010).

More transcripts for your money!

The numbers represent the average transcript-frequency. The percentage describes the ratio of transcript species present at this frequency. 74 % of the transcript-species in this tissue (Mouse-spleen) are only expressed at levels below 20 copies per million. With MACE (left), these low-copy transcripts, among them are key players of the cellular function like transcription factors or receptors, which are securely identified while they remain obscure with microarrays (right). The costs for both techniques are in a similar range.

Why “Number of Reads” Does Not Equal “Sequencing Depth”

In MACE, we use our TrueQuant molecular barcoding technique to eliminate PCR introduced bias. In a regular RNA-Seq experiment, the quality of the data is often thought to be related to the numbers of sequenced reads. However, during PCR steps of the sample preparation procedure, the original template molecules are amplified. While only the template molecules carry the information, the PCR products are simply copies of them and in theory only one copy would be sufficient, while all others do not contribute to the information content of the sample. It is pivotal to identify these “PCR copies” and eliminate them, as they can introduce a bias into the data. At the same time, only those “copies” can be kept that have the best read quality, which strongly improves the data quality in general. The best currency for RNA-Seq quality is therefore the number of unique reads in the sample, not the number of reads. With TrueQuant, we can eliminate PCR copies and therefore strongly improve the results. 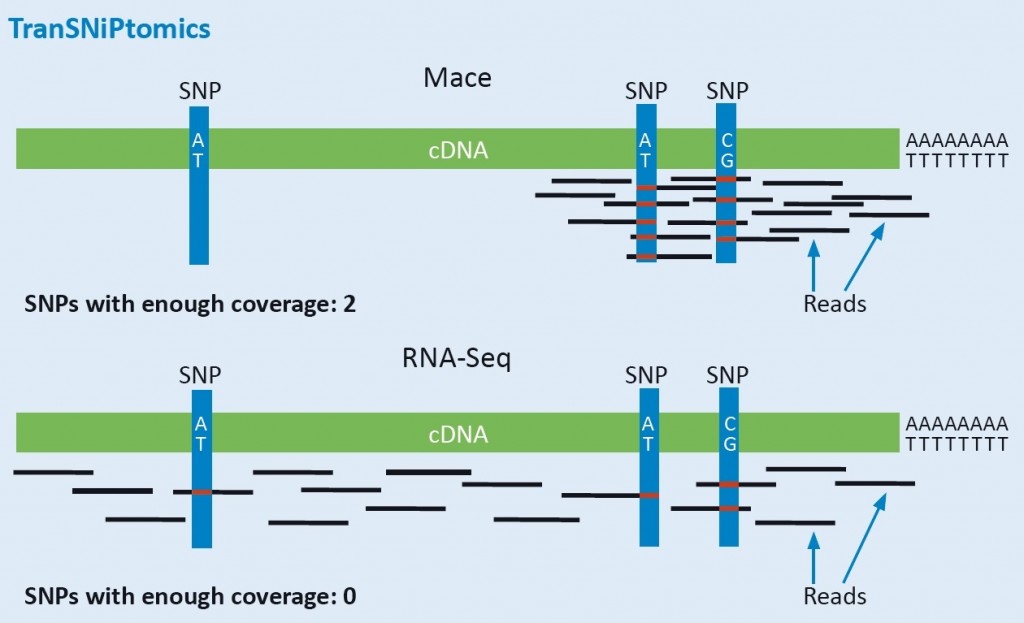 MACE reduces the sequencing to the SNP-rich 3‘ Ends of the cDNA. This ensures high coverage of this polymorphic region, even of low-level expressed transcripts. Therefore, SNPs and other variants can be reliably detected by MACE, simultaneously with the exact measurement of gene expression levels. Because of the much lower costs when compared to RNA-Seq, MACE is the ideal platform for simultaneous genotyping and gene expression analysis. All identified polymorphism (alleles) are highly valuable markers, because they are located within the gene, and not, as with most other GBS-techniques, randomly distributed throughout the genome. MACE- derived markers or alleles are therefore highly coupled to traits. Thanks to parallelization of our processes, we can analyze hundreds of samples simultaneously. MACE is therefore also increasingly used for genotyping purposes. 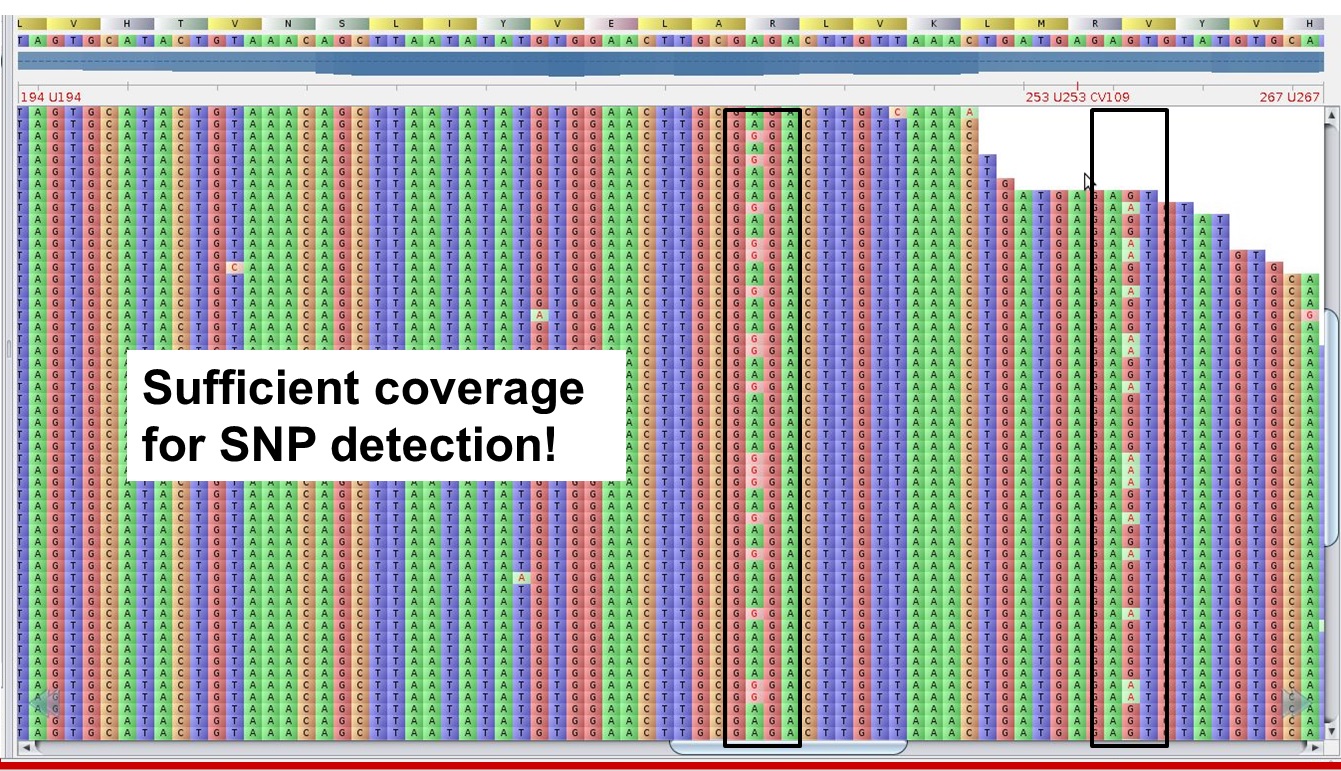 Thanks to the high coverage of the sequenced region and the allele-specificity of the 3’ Ends, MACE is also ideally suited for the analyses of Allele Specific Expression (ASE).

Because the MACE-tags (reads) can be generated in a way such that most of them contain a part of the poly-A tail, Alternative Poly-Adenylation (APA) can be monitored very accurately (for example Tushev et al 2018). Because APA can prevent the transcript to interact with miRNAs (see e.g. Mayr & Bartel, 2009), APA leads for example to increased stability of transcripts e.g. of oncogenes, it also can lead to truncated transcripts including tumor supressor genes as observed 2018 in leukaemia. Hence, the analysis of APA is pivotal for understanding gene activity and certain disease mechnanisms, especially in combination with miRNA research. MACE-Seq was used to generate a comprehensive database for APA in different organisms (APADB). 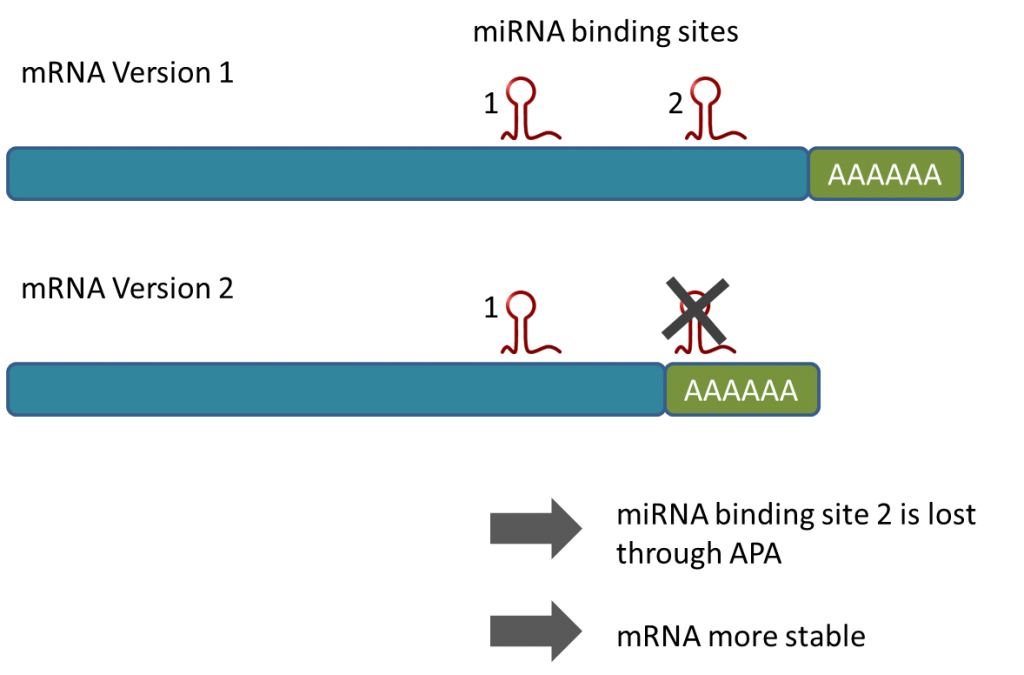 Unbiased and Reproducible Library Preparation from Different Amounts of RNA

Aligned reads (after PCR duplicate removal) of the four different cDNA pool sizes are highly correlated despite of the different cycle numbers that were necessary for PCR amplification. Data from multiple library preparations and sequencing runs can thus be combined without introducing batch effects.

* Averaged percentage for pair-wise comparison of aligned and normalized reads from seven libraries.

for transcriptomes with highly abundant transcript species such as globin in whole blood transcriptomes we efficiently deplete these transcripts prior to the sequencing library generation in order to increase the proportion of the remaining transcripts.

MACE: As Service or Kit

Please request for our service here or for our MACE kit at info@genxpro.de 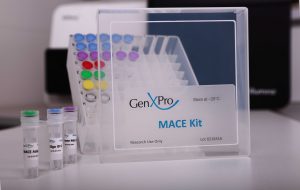 Because MACE data has some special characteristics, we include the bioinformatics analysis both for the service and the kit. Therefore, you do not need to set up your own bioinformatics and can profit from our constantly improved and widely used bioinformatics pipeline.

Besides the raw-data, you receive ready-to-use results tables containing NCBI or ENSEMBL IDs and descriptions, expression values, p-values for differential expression, Fold Changes, SNPs, etc., which can conveniently be analyzed e.g. with other bioinformatics analysis tools or Excel.

In addition, we provide Gene Ontology (GO) Enrichment Analyses and plots and graphs which can be easily accessed and browsed using our Web-Interface (http://tools.genxpro.net).

Data is provided via WEB-access or can be shipped on a hard-disk.

Ship us the tissue or RNA, we make the rest !

Simply provide >100 ng of DNA-free RNA or enough raw material to obtain an equivalent amount. We will perform the entire analysis and provide result tables, SNPs, GO enrichment analyses, provide the best candidates for markers and perform other analyses if requested.

Please use our sample shipping form when sending samples and have a look at our “getting started with genxpro” document.

Some references and testimonials

Please have a look at numerous publications about MACE and our other techniques and services here. 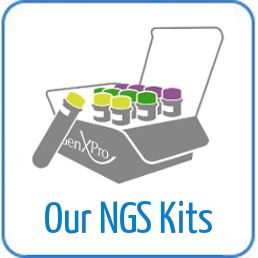 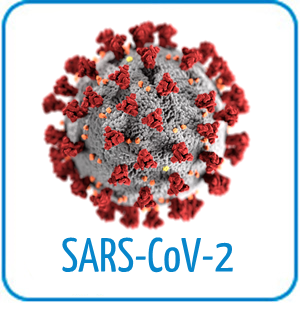